Where are the industry ethics?

Las Vegas Overwatch: Where are the industry ethics?

With the Las Vegas shows starting tomorrow, I am reminded of the situation at the JCK Show three years ago when the Chinese dealers were selling jewelry made from the material seen at left, composed of powdered turquoise and plastic and sold as “natural turquoise”. When I questioned the ethical practices of this the Chinese dealers got the GIA to issue an identification report calling the material “natural turquoise”.

Absurd! You may say. Fact! I retort. This is a true story.

The whole situation brings into question our modern day industry perception of ethics. What are ethics? More importantly, what do we as an industry do when we see breaches of ethics? And who is really held accountable for breaches in ethics when it is, in fact, a proven breach of ethics?

The problem was, in 2008 Jordan Clary, reporter for Colored Stone Magazine spent many weeks there and found no trace of a Tibet andesine mine, and no one in the town had ever heard of it. The whole Tibet andesine story magically appeared after Hughes arrived in Tibet at the behest of Jewelry Television and Andegem. Clary’s report was published in Colored Stone Magazine. You can read the full article here: Sunstone Hunting in Tibet.

Perhaps more damning to the Hughes hoax report was the report from the National Gem Testing Center of China. They sent a team to the Tibet location where Richard W. Hughes claimed to have found this mine, and instead found a warehouse full of artificially treated felspar, and reported no evidence that any mine existed at that location. No geology to support the Hughes claim.

But wait…there is more!

While Hughes offered no geological evidence to support his mine claim, a professional geologist studied the area where Hughes claimed to be the source of the gemstones, and the area where the claimed alluvial deposit was supposed to exist. She found that for an alluvial deposit to exist where Hughes claimed, the water would have had to flow 130 kilometers away and UPHILL!

But wait, there is still more!

The research done on this issue by Dr. Joel Arem concluded that andesine feldspar of the type claimed in Tibet does not exist. Furthermore, investigations with the Geology Department of the University of Texas at San Antonio further confirmed that andesine does not occur in large transparent crystals as claimed by Hughes. Dr. Arem’s report is still available on the website of the Canadian Institute of Gemmology: OBSERVATIONS ON THE OCCURRENCE OF PLAGIOCLASE FELDSPARS.

The end result is that there is a myriad of prima facie evidence that the Tibet andesine expedition reports by Richard W. Hughes are hoaxes, perpetrated by Hughes and his crew.

And yet….Hughes continues to be a keynote speaker throughout the industry, and this blatant and costly breach of ethics has simply been swept under the rug by the industry. 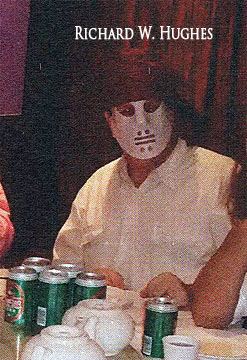 Where is our commitment to ethics? At what point do we hold industry leaders accountable when they perpetrate fraud? Clearly Richard W. Hughes committed fraud. I am putting this in writing in case he wants to take the “Jason” mask off and confront this face to face.  (This is part of a larger image taken by Hughes and his “Gobsmacked Gang” with a threatening letter sent to my home).

I have a few people who tell me that this was all 6 years ago and that I should let it go. But I tell them and all of my readers here that there is no statute of limitations on multi-million dollar frauds that virtually wiped out the Oregon Sunstone industry. This thing is not over until it is over.

We are either going to stand for ethics in this industry, or we are going to have anarchy.

You will need to choose for yourself.

Richard W. Hughes certainly chose not to follow the path of ethics.

This will not be over until the Oregon Sunstone miners get a retraction of the Hughes Expedition Reports published in the GIA and Gem-A Publications, and an apology from Richard W. Hughes for trying to kill their business.