The issue of ruby treatments has been at the forefront of the industry for a number of years. Given the remarkable influx of low cost rubies of fairly nice quality, it is widely assumed that a large volume of these rubies are on the market and being sold without proper disclosure, most often by department stores and jewelry television shopping channels, among others.

With the ongoing problem of undisclosed ruby treatments, over the past few years we have done extensive reporting on how to identify these treated rubies on a grass-roots level, including information from the world’s foremost authority on the treatments of ruby, Ted Themelis of GemLab Inc., and his books: Flux-Enhanced Rubies and Sapphires (Themelis 2004) and The Heat Treatment of Ruby and Sapphire (Second edition, Themelis 2010).

Residual flux in a fracture filled ruby is seen at left when the light direction is changed. This 5.45 carat cabochon ruby is from the IIJA Student Reference Collection.

According to Themelis: There are two types of fracture-filling processes for ruby:

Likewise, however, the term “glass-filled” is an improper term because the traditional concept of glass is actually not used in these treatments. What the labs and industry are referring to as glass should be correctly referred to as lead compounds according to Themelis.

The bottom line is that the flux-healed/infilled term still refers to a glass-like filler material, but the filler material cannot be correctly referred to as glass-filled.

To demonstrate the concept that the heat treatment of ruby to repair fractures is far more convoluted than a couple of trade terms, below is a listing of additives based on Themelis 2004 book:

There is also a long listing of possible natural, chromophoric and other additives that can be used, in addition to an unknown number of newly developed additives since the publication dates.

The bottom line is that flux-healed/infilled is not an actual disclosure but is rather a general term that includes all types of ruby treatment, and does not denote any specific treatment. Like-wise, the term glass-filled is not completely accurate since the compound being called glass is actually a lead based compound with a glass-like appearance, but not glass.

This process has been known since the 1970’s and intensified in the 1980’s, according to Themelis. Borax based additives are used with high heat to partially melt the ruby crystal along the fracture walls. Upon cooling, this melted corundum along with the additives in the treatment mixture solidifies to heal the fracture. The healed fracture is full of both re-crystallized corundum and solidified material from the flux compound as seen in the photographs below.

Borax-based fracture filled ruby with residual flux in the healed fractures. Ruby is from the IIJA Student Reference Collection.

This process is based on Svi Yehuda’s 1982 research of diamond fracture-filling. This process works in a slightly different method than the borax based ruby filling. In the case of the lead compound material none of the existing corundum crystal is melted or re-crystallized. The fracture is healed entirely using additives from the flux compound. Like the fracture-filled diamonds, it leaves a diagnostic flash effect that is normally seen as blue flashes along the healed fracture lines as seen in the photos below. 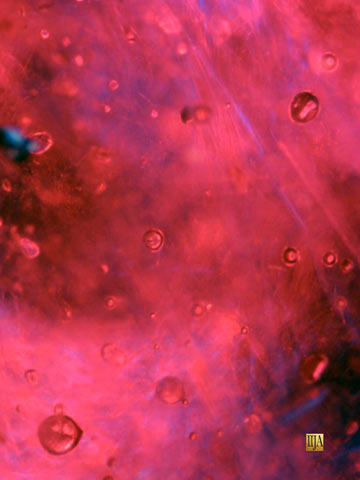 High magnification view of a lead compound-filled fracture in a fracture-filled ruby. Ruby is from the IIJA Student Reference Collection.

Comparison of Borax and Lead Based Compounds

Be Careful in Las Vegas

It is a verified fact that the show venues do not police their vendors. From treated rubies to the fake Tibet andesine to fake turquoise…the shows just want their booth and advertising fees from vendors, and have nothing to do with the quality of products being sold by those vendors. The issue of the fake turquoise, certified by the GIA for the JCK Show dealer, is a case on point. The Tibet andesine fraud perpetrated by members of the GJX Show in Tucson is yet another.

I would like to say the American Gem Trade Association show is the one exception, but as long as they give safe harbor to Julie and Feng Chen and Ande Gem, Inc., perpetrator of the $100 million dollar Tibet andesine fraud, the AGTA cannot make claim to offering protection against deceptive gem trade practices.

As a gemstone buyer it is up to you to be aware of the fact that the shows do not police the sellers, and you are on your own when buying at any of the shows.

“Caveat emptor!” is more than just a cool phrase for buyers…it is a rule that all buyers should follow at every show in Las Vegas.